Review of The Bourne Deception CD

Discription by Hachette:
After Bourne is ambushed and nearly killed while in Indonesia, he fakes his death to take on a new identity and mission- to find out who is trying to assassinate him. In the process, Bourne begins to question who he really is and what he would become if he no longer carried the Bourne identity. Across the globe, an American passenger airliner is shot down over Egypt-apparently by an Iranian missile-leaving the world wondering if it was an accident or an act of aggression. A massive global team lead by Soraya Moore is assembled to investigate the attack before the situation escalates.
When Bourne's search for his would-be assassin intersects with Soraya's search for the group behind the airplane bombing, Bourne is thrust into a race to prevent a new world war. But it may already be too late.
There is plenty of action and romance. (I like that stuff.) But I kept getting lost as the writers kept cutting from place to place, story line to story line and back again. And the ending didn't...it just made me look at my husband and go "What the??"
The reader is good except when he has 2 Russians in conversation. It is sometimes hard to differentiate between them but the accents are good. I have a problem with the lady art dealer's voice and accent which DH does not.
Daddy would have liked it. And that is the joy of books, whether in copy or voice, there is something for everyone!

Thanks for the review. :)
I haven't read the other books so I think I'd be lost with this one.

For some reason, I couldn't quite get into that series...
I guess some things just aren't for everyone!
Thanks for the review :D 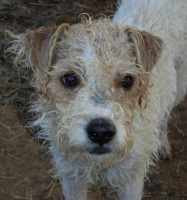 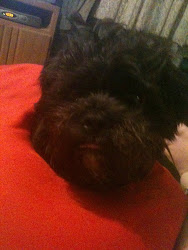 He's about 1.5 years old. Our newest rescue. He got his name because when found, he looked all black except for a bunch of white on his chest. He is supposed to be half poodle and half schnauzer. All I know is he is cute, smart, and fun!

How to get emails of new posts

Translate for those who cannot read English